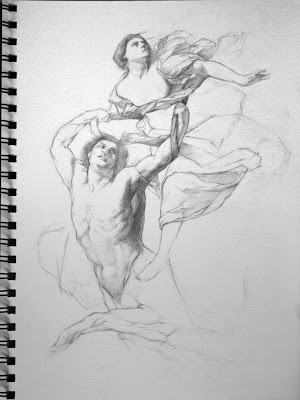 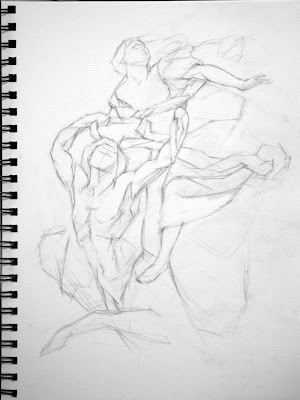 This one I did primarily with block-in just to break it down and simplify it, and because it was hard to see the gesture of the kidnapped Deianerira as so much of her body is obscured by drapery. But I also cross-checked my block-in by visualizing the major curves and modifying the block-in where I had made errors that disrupted the overall lines of movement.

The centaur's extended leg in the lower left shows how using both approaches leads to greater accuracy. In the block-in stage the leg was elongated and stretched too far - easy to check by seeing where it falls directly under the tip of the extended elbow above. But when I corrected it I used curved method and found the correct shape according to the logic of the anatomy (which is just amazingly painted by Reni.)

I have been thinking a lot about figure drawing recently and all the approaches for teaching - not necessarily how the figure has been drawn, but how figure drawing has been taught.

The ateliers in the tradition of Gammell, Lack, and Angel all seem to use a sight-size approach and begin a student with cast drawing. I think most use the Bargue plates for beginning instruction as well. My understanding (without having studied this method) is that this trains the student to develop a highly sensitive ability to see angles, distances and values. It seems to me the goal here (again, without having direct experience) is to capture your subject exactly as it would appear if projected on the picture plane between you and the subject.

The tradition from the Golden Age of Illustration gave us constructive drawing in the vein of Bridgman and Vilppu and Reilly, (oh and Loomis), where the figure is conceived of as 3-dimensional wireframe construction of wedged rectangles and cylinders (if I may oversimplify and generalize these distinct methods). My understanding is that this is the approach used to teach animators and illustrators. The focus is on movement and the benefit is capturing gesture and pose quickly and efficiently, and teaching quickly and efficiently.
UPDATE 3/6: In the comments section of this post some excellent corrections and comments were made, be sure to read those.

Finally, as I would term it, "Expressive" figure drawing is from the tradition for teaching illustrators, but is highly influenced by expressionistic approach to fine art painting of the 20th century. The goal is to get a student to loosen up, use big arm movements, and to let go of inhibitions. I also believe this method is an ideological reaction to the art world's derision of figurative fine art in the last century, so the figure had to be approached with expressive marks to give it validity in an anti-figurative era (this is my own unsubstantiated theory). An example is here.

My teachers Ted Seth Jacobs and his students have modified their teaching from these traditions. Although Ted studied under Reilley and is connected to the 19th century academic lineage, he does not teach Bargue or sight-size. As I have documented in detail on my blog through my class notes (see "labels" in the right column), the focus is on developing an understanding of the 3 dimensional structure of organic form and the way light behaves on form. The student develops an understanding of life as organized and how each part is in harmony with the whole.

Each of these methods and their practitioners have critiques of the other methods: some lack form, some lack movement, some lack variety of markmaking, some lead to overmodeling.

I think each of these methods can benefit from the critique of the other traditions. Each approach has benefits and each has drawbacks, but ideally a student would spend at least some time studying each of the approaches.